About 2500 years ago, Hippocrates – considered by many to be the father of modern medicine – said, “Let thy food be thy medicine and thy medicine be thy food”.
Read More

Truer words have never been spoken.

In our rapidly evolving, high tech world, many believe that we can easily reverse long term damage to the body with “magic bullets” such as “superfoods.” Sadly, no single food will do this, no matter how “super.” Some foods may be superior to others in terms of nutrient content, antioxidant capacity and so on. But it’s the diet as a whole that matters.

This is why we avoid talking “superfoods” with our patients. Rather, we focus on the standard principles of healthy eating to encourage wise food selection, as well as the addition of supplements as necessary.

One thing we don’t like to do is impose a lot of strict “don’ts.” Rather, we focus on the “dos.” The broadest of these is simple: Eat a wide variety of lightly processed foods. (The only time food is unprocessed is when it’s still on the plant. Processing begins when a fruit is pulled off a tree and a carrot is pulled from the ground – hence, “lightly processed.”) And let colors be your guide to selecting food: vibrant and varied.

There is one “don’t” we strongly encourage, though.

In the 1500s, refined sugars were made available to the masses. Queen Elizabeth I was so fond of sugary foods that foreign ambassadors noted how her teeth were black and some were missing all together, often making it hard to understand her when she spoke. Yet black teeth were quite the fashion then – though probably very painful!

Not until the 1700s, when Pierre Fauchard wrote of his experiences practicing dentistry, was the link made between refined sugar and tooth decay. Despite this link being well established, Westerners kept eating more and more of the stuff.

About 200 years ago, the average American ate about two pounds of sugar per year. We now eat around 152 pounds per person per year.

Sugar is the most popular ingredient added to foods in this country. Nearly every processed food may contain it in large amounts. Suffice it to say that you can do wonders for your oral and systemic health simply by limiting your intake of processed foods.

In addition to limiting your intake of sucrose (white table sugar) and other refined sugars, synthetic substitutes should also be avoided. These include sucralose, aspartame and saccharine. Sugar alcohols like xylitol cause less trouble for the teeth, but some people find them hard to digest. The naturally sweet herb stevia may be used, but only sparingly.

In 1939, Weston A. Price published Nutrition and Physical Degeneration. His remarks are as pertinent today as they were then – perhaps even more so. It stands as a thorough and meticulous document of observations he made over decades of visiting “primitive peoples” eating “primitive diets” and comparing them with their “civilized” biological counterparts in the industrial world, eating their “civilized” diets of highly processed foods and large amounts of refined carbohydrates.

It became clear to Price that modern diets lead to inadequately formed jaws, creating the need for orthodontics and extractions, as well as rampant tooth decay. High protein, high fat, low refined carb diets, on the other hand, were responsible for full physical development and minimal tooth decay.

“Let us go the way of the ignorant savage, consider his way of eating, and be wise. Let us cease pretending that toothbrushes and toothpaste are any more important than shoe brushes and shoe polish. It is store food which has given us store teeth.” 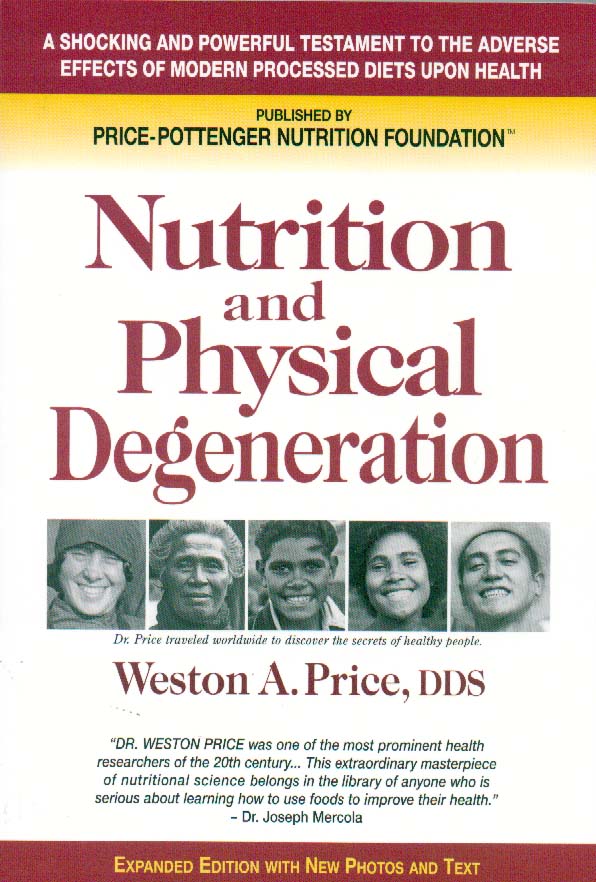 In the mid-1930s, farming had not reached the level of mechanization and monoculture that we see today. However, Dr. Price was prescient in his remarks concerning soil depletion and animal degradation, and he was very concerned that even consuming a “primitive diet” would not be sufficient to maintain good health because the foods would contain inadequate nutrients.

This was well before factory farms had ever mastered concentrated animal feeding operations with their massive dependence on antibiotics, steroids, and inappropriate diets fed to animals under great stress. This was also long before the use of genetically modified (GMO) foods to allow the widespread use of pesticides and herbicides that are safe for the altered seeds but not for us.

Today, between 80 and 90% of all the soy, corn, cottonseed, and canola consumed in this country is genetically modified. We can’t even begin to know the sweeping harm these foods could be responsible for causing.

It has become a much more complex task than it once was to eat a complete diet. Assuming that one does eat well, it is difficult to be assured that all the vital nutrients that we need on a daily basis will be absorbed, because we have been so damaged by the many insults our bodies suffer ranging from biological toxins, in the form of heavy metals, to rampant gut dysbiosis, neither having a single root cause but certainly not helped by the ingestion of antibiotics and pesticide laden foods.

These statements have been so often repeated that they have become cliché, and yet they are more important now than they have ever been. Indeed, we are what we eat, and at no other point in our history have we damaged ourselves so thoroughly as we do today, by mutating what should be life and health sustaining food.