Why did we put up this image of the Mad Hatter?

For perhaps centuries, it has been known that mercury exposure can lead to neurological problems and sometimes death. In the 18th and 19th centuries, hatters would use mercury compounds in order to manufacture felt. For many, this would result in “madness.” 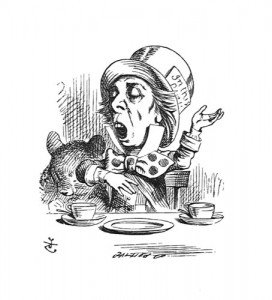 Today, we live in a world where mercury is abundant, especially so because it is a byproduct of coal mining and so much of it becomes airborne. Besides ocean-dumping of mercury, the filtering down of airborne mercury particulates has contaminated our seas, with the largest sea creatures often carrying the largest load simply because they have consumed so many smaller creatures that have a bit of mercury and the total becomes cumulative. As our large fish consumption increases we store more mercury from these foods.

Additionally, for large parts of the twentieth century, mercury in the form of mercurochrome was used as a disinfectant for wounds. Thimerosal, a mercury containing compound has been used as a preservative for many bulk vaccinations.

In the first half of the twentieth century, many dentists performed prophylactic odontomies on children – a procedure like the placement of sealants – by cutting into the grooves of the teeth and filling these areas with amalgam. And even today, despite all the great advances in dental procedures, many dentists continue to place amalgam fillings, which are 50% mercury. They can remain in people’s mouths for decades.

These amalgams off-gas mercury vapor and, except for a small cohort of the population who excrete the mercury, and this volatile substance is inhaled and then absorbed and stored in fatty tissues (including the myelin that insulates nerves).

Unfortunately, mercury is in many of the things we come in contact with on a daily basis. For some people, the additional burden of mercury vapor exiting the “silver fillings” in their mouths may contribute to a host of progressively debilitating chronic diseases. Certainly pregnant mothers with amalgam fillings need to be alerted to the fact that the vapor enters the bloodstream and will be deposited in the growing fetus, potentially setting the stage for neurological disorders later.

It is with the awareness of the hazards of this material that we take the utmost precautions when removing the material from our patients. It is for our mutual protection and health.